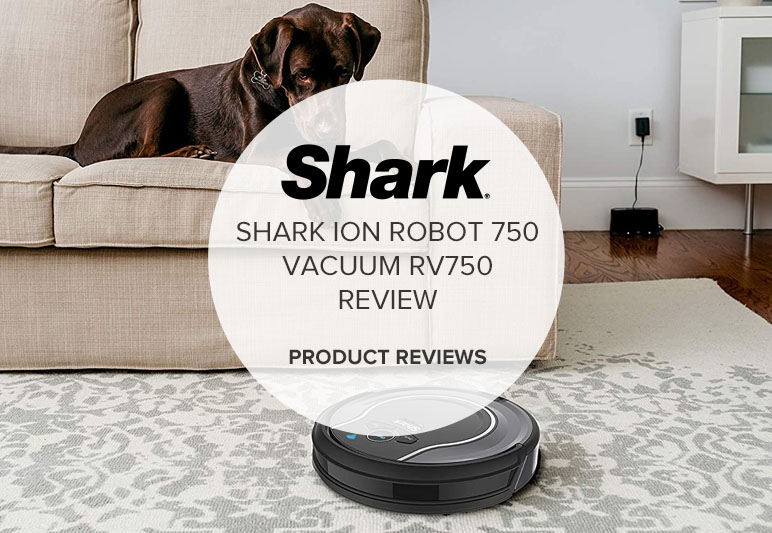 Disclosure: The Clean Freaks may earn a commission for purchases made after clicking links on our site. It won't cost you anything (you may even save a little) but it will help us maintain our site. Learn more.

The Shark ION™ Robot Vacuum 750/RV750 is the updated version of the Shark ION 720/RV720 by adding WiFi connectivity so you can control this unit with your phone app via Alexa voice. This robotic vacuum keeps all of the best features such as smart navigation sensors, self cleaning brush technologies, low profile and affordable price.

By the way, this model is the same as the Shark ION™ R75, it’s just that different sites and retails are assigned different model numbers for tracking (and sometimes people drop the letters when talking about it. It is also the same as the R76 series with the exception of color. The R75 is black and the R76 has dark blue accents.

This robotic vacuum keeps all of the best features from Shark Ion Robot RV720/R72 such as smart navigation sensors, self cleaning brush technologies, low profile and affordable price.

Shark Ion Robot RV750 is one of the best robot vacuum at a decent price when compared with other brands at the same price range. The only minor downside is that it has a short run time of 90 minutes. This means for multiple large rooms it will probably have to return to its dock to recharge.

This unit is very similar to the Shark ION ROBOT 720. Both models have Smart Sensor Navigation. They also work well handling both long human hair and pet hair, and run relatively quite.

Rather than repeat ourselves, you can learn more about the technology used in Shark Ion Robot here.

Compared to the 720, the additional feature on Shark Ion Robot 750 is WiFi connection so that you can schedule this unit via Alexa Voice.

It is important to not that even with this Smart technology, the R75 is not as “smart” as other models because it does not have room mapping functionality — but that also means a lower price tag, so it depends upon what you need.

Both the 750 or the 720 robotic vacuum have no problem transition between different thickness rugs or going from carpets to hard floors. It can’t go up stairs on its own, so you will have to carry it. It does have sensors to avoid falling downstairs though.

Compared to the ION 87/RV871, the dust cup is smaller. Additionally it is more powerful and has three times the suction when in Max Mode than the 750.

For comparison between iRobot vacuums, the ION 750 is most similar to the Roomba 960. We have a review for that if you want to see the features of the Roomba.

We are three friends with a passion for sharing content and awesome deals! Learn more about us.

Save with Amazon Prime

Check Out Our Latest Finds

You Can Pay for Food with EBT on Amazon!

We use cookies on our website to give you the most relevant experience by remembering your preferences and repeat visits. By clicking “Accept”, that means your good with it. For more info view privacy policy.

This website uses cookies to improve your experience while you navigate through the website. Out of these cookies, the cookies that are categorized as necessary are stored on your browser as they are essential for the working of basic functionalities of the website. We also use third-party cookies that help us analyze and understand how you use this website. These cookies will be stored in your browser only with your consent. You also have the option to opt-out of these cookies. But opting out of some of these cookies may have an effect on your browsing experience.
Necessary Always Enabled
Necessary cookies are absolutely essential for the website to function properly. This category only includes cookies that ensures basic functionalities and security features of the website. These cookies do not store any personal information.
Non-necessary
Any cookies that may not be particularly necessary for the website to function and is used specifically to collect user personal data via analytics, ads, other embedded contents are termed as non-necessary cookies. It is mandatory to procure user consent prior to running these cookies on your website.
SAVE & ACCEPT